There are many local pizza places to choose from and one thing I’ve learned is that everyone has their own preferences.  Some like thick crusts, some thin, some like a lot of sauce, some prefer less.

It seems like everywhere we go with children’s functions they are serving pizza or chicken nuggets, so usually I’m leaning toward ANY other type of restaurant….but with a child their preferences rule in many cases, so I try to lean towards a pizza place with a more extensive menu where I can get something else and let my son choose where he wants to go.

Without a doubt Chase always chooses “my soccer coach’s place”  – St. Angelo’s on the West Side of Vinings off of Log Cabin Drive at 4686 S. Atlanta Road.  His other favorite pizza place is “pizza and a train” –  New York Pizza Exchange on the train tracks in Vinings, at 2810 West Paces Ferry Road.

There are many other places including Mellow Mushroom (in Vinings Village) and Mulberry Street Pizza (across 41 from Kroger).  I run by there for lunch quite a bit since it seems to be on my route going everywhere and has easy parking. They can get you a slice quickly while you sit and watch the news on their TV’s.

St. Angelo’s is owned by Vinings residents Cecilia and Sean Rowe and they are very involved in all things Vinings, so Chase knows them and likes to go there and feels like he knows the owner.  They give him dough to play with and he can watch them make the pizza. 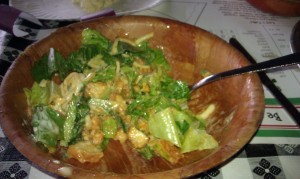 With my son making some of our dinner decisions, I love going to St. Angelo's in Vinings so he can eat pizza and I can have a salad.

St. Angelo’s has a very fun family night on Thursday where kids eat for $0.99 and that includes their fountain drink, carrot/celery and ranch dressing, a slice and gelato – can’t beat it.  Then I can have a salad, cheese bread and even an adult beverage if I’m in the mood. 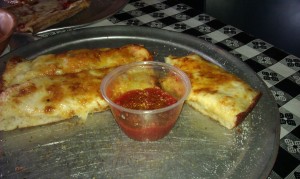 The breadsticks at St. Angelo's are also really good!

We’ve been going to “pizza and a train” (New York Pizza Exchange) since Chase was a baby (he’s still mad at his mom for helping to stop the whistle blowing as the train is passing thru Vinings).  He still rushes to the window or insists we sit right next to the tracks.

I’ve heard that many people love the pizza at West Vinings Village; I think its called Blue Moon Pizza, but that’s not as much on my daily path.

I was addicted to Pero’s Pizza for years as my office use to be next door in the shopping center where Houston’s is and we still go to Pero’s quite a bit for other types of Italian food. The thing is they don’t have a children’s menu, so I’m thinking they don’t encourage kids?  They’re always nice to us so I can’t imagine that’s it, but in this day and age I thought everyone had a children’s menu!

When Chase wants his “special mac and cheese” which is basically Alfredo sauce instead of cheddar and he wants to make Italian bread dipping sauce, which he is very good at making “our” special recipe, we go to Maggiano’s at Cumberland Mall and have regular Italian sans pizza.

I’d love to hear what your favorite pizza places are in Vinings as well!

This entry was posted on September 14, 2011, 8:54 am and is filed under Living, Restaurants, Vinings. You can follow any responses to this entry through RSS 2.0. You can leave a response, or trackback from your own site.